The Tour of Sufferlandria (ToS) was the indoor cycling event that got it all started for me last year. A 9 stage, 9 day indoor cycling suffer extravaganza billed as the Greatest Grand Tour of a Mythical Nation. I trained for it, I rode it, and it led to me accumulating a tonne of miles over the off season and even obtaining my Knighthood a few months later. I lost a bunch of weight, it was amazing! This year… well, this year has pretty much sucked. Everything is doing it’s best to screw with me and I’ll be honest, that fire has yet to be lit this year. I’m not feeling it.

I don’t need to run any software to do the tour, but I like to. I like to have some metrics on screen to judge my performance. But despite the fact that I own 4 computers, none of them are working right. I keep performing surgery and getting at least one of them to run, maybe I’ll have some luck, if not, I’ll keep riding. Work seems to be doing it’s very best to make sure I don’t have any time to ride reliably. Since about September with the last outage, my work schedule has sucked and has really gotten in the way of riding. So I’ve gained a bunch of weight back and had absolutely no improvement. My mileage isn’t even half of what it was at this time last year, that’s no way to help your fitness! One plus however, I have two outdoor rides already in this year, you know that wasn’t possible last year!

The ToS has the goal of raising loads of money for the Davis Phinney Foundation for Parkinson’s. Last year I donated generously and even raised some funds. This year… no money due to the break-in and having to drop every dime to get a security system. And shittily, I haven’t had the heart to fundraise, that’s kinda lame, eh? In the end, you don’t have to donate to participate, you only have to suffer! The donations get you some entries into a really cool prize pool. Check out the prize pool here, you still have time to donate here! Heck you don’t even have to ride to win.

So, I don’t know… like I said, my heart hasn’t really been into it this year. But the tour starts today for me (I have to start early due to commitments during the week). I’m gonna knock this thing out and hopefully it sets me right. Either way, walking will be a chore for me for a bit! 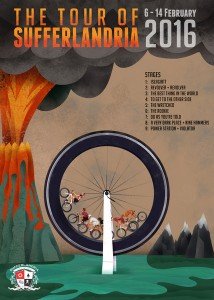