I thought a great way to start out this new website of mine would be to recap my stats from last year. I don’t think they’re too shabby, especially since I’m a 230 pound guy riding a mid-range hardtail mountain bike. I do plan on posting pics of my bike very soon, just so I can remember where this all started since I think I’m going to be doing a lot of cycling. I do intend to upgrade my bike very soon, hopefully sometime during March so that I’m ready as soon as the weather gets tolerable. 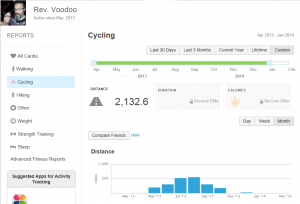 My cycling last year started in April, I was copping out a lot and wouldn’t ride if it was under 50 degrees outside. I think this next cycling season is going to be a bit longer since I’ll pretty much hop on my bike as long as it’s above freezing out. Between April and November of 2013, my total miles added up to 2132.6 miles. That number is huge to me! The first 750 miles even happened on knobby off-road tires, I didn’t upgrade those for the first couple of months! I’m really hoping to grow that number in the 2014 season. Now some finer details. 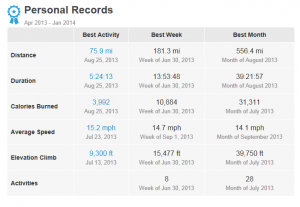 Here’s a list of all my personal records from 2013. It’s kind of nice to have all of those numbers in one place! My longest ride of the year was 75.9 miles. That took me 5 hours and 24 minutes and apparently I burned 3992 calories. Some great numbers. I used to ride 12 miles every morning with a long ride (50-75 miles) every Sunday. My intention once I have my new bike is to pull 20 mile rides every morning with at least 100 miles on Sunday. It’ll take me a bit to get there, but it’s a goal!

I’m pretty excited about getting a new bike, especially one that is designed to actually ride those distances. The geometry of a mountain bike is all wrong for riding 5+ hours straight, my wrists, hips, and back paid the price. I don’t have the best joints due to my extensive motorcycle injuries since I broke all of those things. I think a new bike will be better on my joints, it’ll be faster, and it’ll climb better. Having shoes that lock in will help me with power and consistency.

Here’s to 2014 being a stellar year for riding! Any experienced riders out there have any tips for me on my upcoming goals, bike purchase, shoes, etc? I’m pretty new to all of this!